Hill's Native Art in Nanaimo is located at the very heart of the Arts District in the historic downtown area. In 2000, Hill's moved into a beautiful brick-and-cedar heritage building that was built in 1908 to house B.C.'s very first Telephone Exchange. Award-winning renovations were undertaken to convert the building from its former incarnation as Nanaimo's beloved Bookstore on Bastion into the multi-level gallery and gift store that it is today. Hill's Native Art is just minutes away from Nanaimo's Old City Quarter and is one block from Nanaimo's celebrated Inner Harbour and Waterfront. Just steps from our front door stands the historic Bastion, North America's last remaining original Hudson's Bay Company fort. Built over 150 years ago, it is the oldest structure in the city and the second oldest building in B.C. A few steps further are the Visiting Vessel Pier, the Fisherman's Wharf and the HarbourAir and Baxter Air seaplane terminals. The waterfront is also the home of the HarbourLynx high-speed passenger ferry, a fast catamaran running from here directly to Waterfront Station in downtown Vancouver.

Opened in 2002, the Upper Gallery at Hill's Native Art is a serene, museum-like space that is also used to host various community events such as educational exhibitions and fundraisers for local charities. In the spirit of the Bookstore, Hill's is also privileged to host book launches, author's readings and acoustic entertainment. Exhibitors and performers have donated to such organizations as the Haven Society, Literacy Nanaimo and the Nanaimo Area Land Trust, among others. Recently, Hill's Nanaimo has incorporated exclusive product lines from its Frances Hill's store in Vancouver. Robeez Footwear, Adrian Klis Fine Leathers and Honica Handcrafted Jewelry are now available, adding to the already incredible selection of quality items offered to our customers both in Nanaimo and around the world. 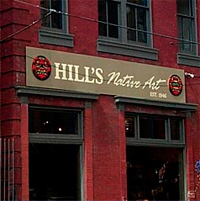 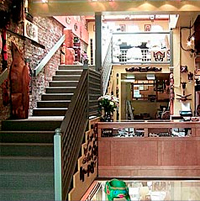 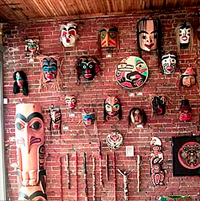